« Read more in: Did You Know?, Inventors, Scientists, Space 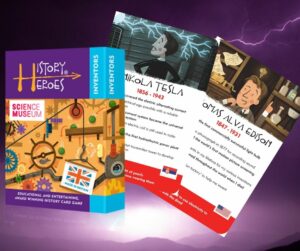 Dr Who has often used history and real historical figures as a backdrop to its drama. Many of those characters over the years are also History Heroes in our various games. EXPLORERS, such as the likes of Marco Polo in 1964 to a brace of royals from our KINGS & QUEENS games, Vincent van Gogh (ARTISTS), Charles Dickens  (LONDON) and Winston Churchill (WORLD WAR ONE, WORLD WAR TWO and LONDON) to name but a few.

What Dr Who does so cleverly is to weave so many facts into its…err…’other world’ plots. In ‘Nikola Tesla’s Night of Terror’ we meet Nikola Tesla and Thomas Edison as rival inventors in New York. Both are trying to find the answer to creating a stable supply of electricity. Thomas Edison’s direct current system is the dominant invention but it is an unstable system. The person, who can deliver a STABLE supply of electricity, will power the modern, industrial age. 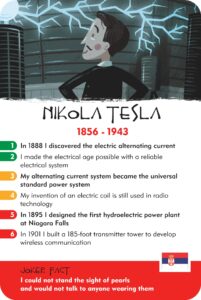 In the Dr Who episode, Nikola Tesla appears as an idealistic inventor. He has no money. His sponsor, JP Morgan has refused to fund him any more. He has built a huge, futuristic tower in Long Island and he is sure it can transmit information wirelessly across the globe. He also believes he might be able to communicate with life on Mars through his inventions.

All this was completely true. Tesla had an amazing imagination. He ‘dreamt’ up many of his inventions and then would stay up for days and nights without sleeping, working on them. He did indeed invent many of the components to transmit radio signals. His huge Whardenclyffe Tower in Long Island might have been the first to do so. But Tesla ran out of money in 1901 before he could finish the tower. His sponsor, JP Morgan, had given him $150,000 to build it. Morgan refused to fund Tesla further. In December 1901 Gulglielmo Marconi ‘borrowed’, ie. snitched, several of Tesla’s patented inventions. Then Marconi built his own  wireless tower and transmitted the first radio signal from England to Newfoundland. 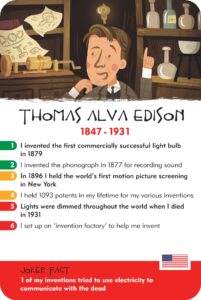 again, absolutely true. As the episode shows, Edison did once employ Tesla. In fact, the story goes that Tesla arrived in New York in 1884. He had 4 cents in his pocket and a letter from a former employer to Thomas Edison. The letter said, “My dear Edison: I know two great men and you are one of them. The other is this young man (Tesla)”.

As Dr Who shows, Edison DID employ Tesla and he did offer Tesla $50,000 if Tesla could improve Edison’s DC electricity generation plants. When Tesla showed Edison that he could do just that, Edison did indeed refuse to pay Tesla. As in Dr Who, Edison is supposed to have said to Tesla, “When you become a full-fledged American, you will appreciate an American joke”. Tesla quit his job with Edison thereafter.

Tesla’s AC electricity system WAS better than Edison’s DC system because it offered a stable supply of electricity. As Dr Who suggests, however, while Tesla was a brilliant inventor, Edison was an even better businessman. So, despite Tesla’s arguably better inventions, Tesla died penniless and Edison became extremely rich.

The Dr Who episode suggests that Tesla had such a vivid imagination that he believed that he could contact life on Mars. Tesla did believe that. The Dr Who episode might lead us to assume that Edison was the ‘sensible’ one, who had no such flights of fancy. In fact Edison also believed in life on other planets too. He said, “I cannot believe for a moment that life…originated on this insignificant little ball, which we call the Earth”. Obviously they both could well be right. Presumably Dr Who would agree!