« Read more in: Did You Know?, Inventors, Scientists

Why is the 28th September not called International Germ Day? It’s a BIG day in Germ history! On the 28th September 1895 Louis Pasteur died. His germ theory changed completely the way people understood what germs were and how they worked. 33 years later on 28th September 1928 Alexander Fleming discovered penicillin, the first known antibiotic and the first stunningly effective defence – at least up until now! – against bacterial germs. 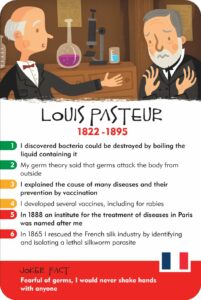 Louis Pasteur was a French scientist, who helped explain some of the biggest questions in the 19th century about diseases. Since the scientist and philosopher Aristotle, two thousand years earlier, people had thought that creatures and disease just ‘appeared’. They thought fleas grew from dust and maggots from dead flesh. They also believed that people got sick from the air. This was called the ‘Miasma Theory’ in which foul-smelling air was full of particles that could infect a body.

Through Pasteur’s experiments and investigations as a chemist, he discovered that tiny organisms, micro-organisms, germs that lived and developed rapidly in the body, caused disease and decay.  Pasteur’s theories seemed shocking and radical in the mid-nineteenth century. A French newspaper, La Presse, said, “I am afraid that the experiments you quote, M. Pasteur, will turn against you. The world into which you wish to take us is really too fantastic.”

Not everyone thought Pasteur was mad however. In 1863 Napoleon III, France’s ruler at the time, sent Pasteur a request. Napoleon III wanted him to look into why wine went bad so easily. Wine making was key to France’s economy and too much of it went off and became useless. Through further experiments, Pasteur discovered that he could kill the micro-organisms in wine by heating the wine to 55 degrees. He soon discovered that the same method worked for milk and other liquids too. We still use this method today for liquids and food and it is called Pasteurisation…now you see from where the word comes! It’s also why Pasteur is both in our SCIENTISTS game AND in our INVENTORS game. Along with his science and development of vaccines, which revolutionised germ theory and our treatment of germs, he invented pasteurisation.

Alexander Fleming was a Scottish scientist, who first qualified as a doctor. He won the 1908 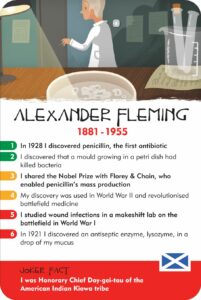 Gold Medal as top medical student at the University of London. He planned to become a surgeon but became interested in a relatively new area of  germ research: bacteriology, the study of bacteria.

As part of Fleming’s research into bacteria, he grew colonies of a certain bacteria on his petri dish plates. Legend says that Fleming only discovered Penicillin by accident. He went away on holiday and left his petri dishes as they were. Some suggest that he simply forgot to clean them and put them away. In any case, when he returned, he recorded what he saw and discovered on 28th September 1928. Mould grew in a ring around the bacteria in one of his petri dishes. No bacteria grew next to the mould. The mould was producing something that killed the bacteria. Alexander Fleming called that ‘something’ Penicillin after the mould itself, ‘Penicillium’. That something became the first recognised antibiotic.

Fleming and Pasteur’s contribution to medicine:

As with Pasteur’s first introduction of his Germ Theory, other scientists at first ignored Fleming’s findings. They didn’t believe Fleming’s suggestion that this mould, this Penicillin could become an effective medicine. Penicillin was difficult to grow in bulk and it would be needed in large quantities to work. Many dismissed Fleming’s ‘accidental discovery’. But Louis Pasteur had wisely said years before, “Chance favours only the prepared mind”. Fleming made a discovery about Penicillin that no one else had seen or recorded because he was looking for it. He dedicated his life to understanding how bacteria behave and grew and what might stop it from doing so.

It took until the 1940s for scientists to discover how to mass produce Penicillin in order to successfully become medicine (and that’s a whole other story, involving MORE History Heroes: Florey and Chain, who you can find in our WORLD WAR TWO game!). But Fleming’s discoveries led to HUGE advances in medicine and our ability to fight disease. He certainly couldn’t have done it without Louis Pasteur’s great discoveries and improvements to fight disease almost 100 years before. They are our GERM History Heroes and deserve their own, shared GERM DAY on their shared date of 28th September! 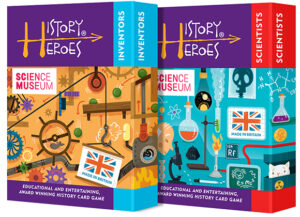