« Read more in: Children, Did You Know?, World War Two

It is hard to imagine that there were any children in World War Two, whose lives did not change as a result of it. Even if you managed to stay in your own home during the war and your family survived intact, you would have to carry a gas mask around with you. You would eat rationed food. You would most likely know people injured or killed in the war. Some children’s lives changed dramatically in World War Two, however, and often both for better AND worse.

As the Nazis increased their hold on Germany, Austria and Czechoslovakia in the late 1930s, people campaigned to rescue Jewish children from those countries. In November 1938 the Nazis unleashed Kristallnacht: a night of terror on German Jews, smashing their homes and businesses and arresting Jews, who had done nothing wrong. The British government then agreed to let in more Jewish child refugees into the United Kingdom as long as they didn’t cost the UK government anything. Charities quickly raised money to bring nearly 10,000 Jewish children from Europe to safety in the United Kingdom from November 1938 until Britain declared war on Germany on 3rd September 1939.

All those children had to leave their parents behind in Europe. Many of the children found fantastic foster families in Britain, who were kind and cared for them throughout the war. Some children went to cruel families, where they treated the children like servants. Some of the Kinderstransport children reunited with their birth parents during and after the war. Many did not see their parents alive again. 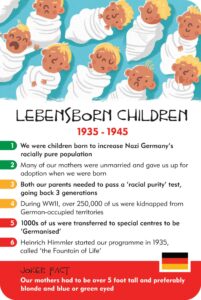 Way before World War Two, the Nazis created a bizarre programme, which affected first German and then other European children hugely too. In 1935, Heinrich Himmler – a leading German Nazi – launched the Lebensborn programme to create more Aryan children: ‘pure bred’, ideally blonde and blue-eyed children: the perfect Germans, as far as the Nazis were concerned. The children’s parents needed to have blue or green eyes, blonde hair and  be Nazi party members.  As the war took hold, however, the Nazis started kidnapping hundreds of thousands of Aryan-looking children too from German-occupied countries. As with the Kindertransport children, many of these children did not see their birth families again.

The Evacuee programme affected nearly three million children in World War Two in Britain too. It was nowhere near as drastic as Kindertransport and Lebensborn for most children but it was still life-changing for many. Nearly two million British children left their homes in cities to head to the safety of the countryside from the 1st September 1939, two days before Britain declared war on Germany. 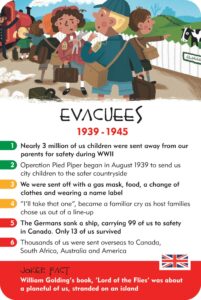 Being an evacuee was voluntary but many children went in school groups from town to country. They could take a small suitcase with them along with their gas masks. Many of the city children had never seen farm animals or eaten fresh vegetables so the countryside was a huge shock to them. As with the Kindertransport children, some of the evacuees went to lovely families and some went to…not so lovely ones! 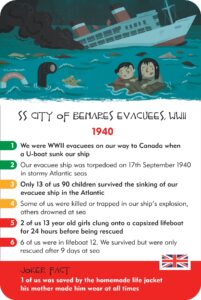 By the end of 1939, however, many of the children returned to their own families and homes. The expected bombs had not fallen and life in the United Kingdom had not seemed to change that much. A second wave of evacuees left their homes when Germany invaded France in May 1940. More evacuees were sent away again in September 1940 at the start of the the Blitz when Germany began to bomb important towns and cities throughout the UK  continuously for 9 months.

Tragically the Germans torpedoed a ship  in September 1940 carrying 90 evacuees. They were supposed to be going to a safer life in Canada. Only 13 of those children survived. Incidents like that on the SS City of Benares (in our CHILDREN card game)  persuaded more and more British parents to  take their chances and keep their children with them throughout the rest of World War Two 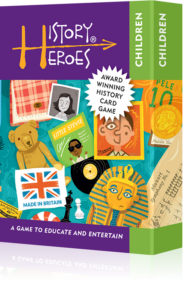 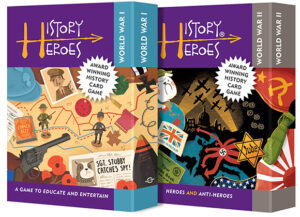