« Read more in: Did You Know?, History Heroes in Education, Women in history, World War One

Find out more about or buy HISTORY HEROES WORLD WAR ONE

Edith Cavell, one of History Heroes’ World War 1 Heroes, was born 150 years ago on the 4th December in a small village in Norfolk, Swardeston where her father was the Reverend. Edith was the oldest of four children, three girls and one boy. She originally found herself in Belgium as a governess and after returning to Norfolk in 1895 to care for her sick father it is believed she was inspired to become a nurse. Edith Cavell’s career as a nurse did not begin auspiciously. Her nursing supervisor at the Royal London Hospital, where Edith Cavell trained from 1896, observed that Edith had good intentions but was ‘unpunctual and not a nurse that could be relied on’. After working in hospitals in London and Manchester, in 1907 she accepted a role in Belgium to care for a sick Belgian child.

In Belgium Edith Cavell soon proved her mettle and quickly became Matron of the First Nursing School there. Back in Norfolk, seeing family, at the outbreak of the First World War, Edith sped back to Belgium, this time to the newly established Frontline, ‘at a time I am more needed than ever’. Edith Cavell tended to ALL the war wounded and was, in fact, criticised for treating Austrian and German wounded soldiers alongside allied soldiers.

At the same time as caring for all the injured soldiers, Edith established a route to smuggle over 200 Allied soldiers out of the hospital and into safe, neutral Holland. The Germans discovered her and her accomplices’ actions and arrested her in August 1915 for harbouring Allied soldiers. Despite an international outcry at her arrest and the then neutral American and Spanish governments pleading for her not to be executed, Edith Cavell was shot by a German firing squad in October 1915, guilty of ‘assisting the enemy’.
After the war, Edith was reburied back in Norfolk after a state funeral in Westminster Abbey. She left many legacies behind her, including a rash of new-born girls in France and Belgium, called after her. The great French singer, Edith Piaf, was one of those – born 2 months after Edith Cavell was shot in 1915. 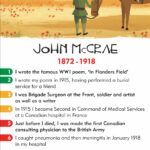 Read how John McCrae, a Canadian surgeon in World War 1, was inspired to write his beautiful, iconic war poem, In Flanders Field