« Read more in: Did You Know?, Inventors, London, Women in history

We often learn about all three together. The Crimean War ‘made’ both Florence Nightingale and Mary Seacole famous in their own time and in history. We see them both as great nurses. They worked at the same time and we often discuss, who was more important. Florence Nightingale is better known than Mary Seacole and Florence, rather than Mary, is seen as the ‘Founder of Modern Nursing’. Why? 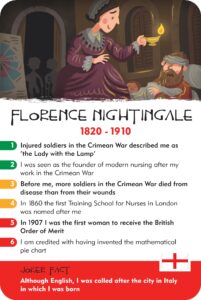 Born in England in 1820, Florence Nightingale  came from a well-off, Victorian family. Her father believed in educating his two daughters – many parents didn’t at that time. Florence learnt quickly and particularly excelled at mathematics. When she was sixteen, she had her first of many ‘calls from God’. She believed her calling was to help reduce people’s suffering. She decided that she wanted to become a nurse.

At the time being a nurse had a bad reputation. Many nurses then were old, poor, drunk most of the time and used a lot of bad language! Florence Nightingale’s family DID NOT want her to become a nurse. But Florence went to Germany in 1851 to train as a nurse there despite her family’s disapproval. In 1853, through family connections, she ran an ‘Institution for sick Gentlewomen in distressed circumstances’ in London.

Florence Nightingale in the Crimea:

The Crimean War began too in 1853. Reports soon came back from there of thousands of soldiers, dying in terrible conditions. Florence Nightingale wanted to help. Her friend’s husband, Sidney Herbert was Minister of War at the time. He asked Florence to lead a party of 38 nurses to  nearby Scutari to investigate the soldiers’ conditions in Crimea. They were shocked by what they saw. They found filthy and overcrowded conditions. The soldiers also had too little food and medical supplies.

So the British Government and the Times Newspaper gave Florence Nightingale funding to improve conditions for the soldiers. Florence and her nurses introduced better hygiene, clean dressings and enough food for the soldiers. They also helped the soldiers write letters home and improve their education. Florence walked the wards with her lamp to check on the soldiers at night. They soon gave her her famous nickname, ‘The Lady with the Lamp’. 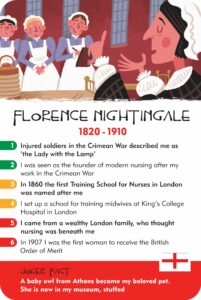 records too and used them to persuade the British government to improve conditions in the British army after the Crimean War. She even invented a version of the Pie Chart – one of the reasons she’s in our INVENTORS game! – to show her facts clearly to the government. Florence Nightingale also used a fund in her name to set up the Nightingale School of Nursing in London in 1860.  That school changed the idea of nursing completely. It gave nurses formal training and made nursing a respectable and important job. That is why people often describe Florence Nightingale  as the ‘Founder of Modern Nursing’ and why she is in our WOMEN in History game!

What did Mary Seacole do?

Mary Seacole is in our WOMEN in history game too for the same reason as Florence Nightingale: both are 2 of the most significant women in history. They both practised nursing at the same time but they had very different backgrounds and very different experiences.

Born in Kingston, Jamaica in 1805, Mary Seacole was a black woman, born to a Scottish soldier father and a Creole ‘doctress’ mother. Mary Seacole learnt much of her nursing and medical skills from her mother, who treated many Jamaicans and British soldiers, who lived in Jamaica. 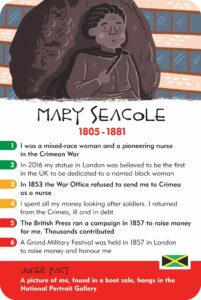 Mary worked for several years in both Jamaica and Panama. In both she treated many people medically. In both, she also ran businesses. In Jamaica, she ran her mother’s hotel and in Panama she ran a restaurant.

Mary Seacole in the Crimea:

In 1854 Mary Seacole arrived in London. Like Florence Nightingale, she wanted to help out in the Crimean War. The British Government would not take her on as a hospital nurse there – some say they rejected her because of her colour. Others report that she applied too late – after the nurses had already set off to Crimea. In any case Mary Seacole refused to take ‘no’ for an answer. She set off for Crimea and set up the ‘British Hotel’ there: a place for British soldiers to stay, eat and buy supplies. Mary Seacole did not forget her nursing ambitions though. She also made several visits to the Crimean battlefields to help and nurse the soldiers there.

By the time the Crimean War ended in 1856 Mary Seacole had lost all her money and she returned to London penniless. People took her to their hearts – they saw her as another good and kind Crimea celebrity like Florence Nightingale. A Festival held in her honour in 1857 raised money for ‘Mother Seacole’ and in the same year Mary brought out her very popular autobiography, ‘Wonderful Adventures of Mrs Seacole in many lands’.

Comparing Mary Seacole and Florence Nightingale’s achievements, it is fair to say that Florence Nightingale  has left a more obvious impression and more concrete legacy on modern nursing. She introduced modern notions and standards of nursing; she reduced the death rate of wounded soldiers in the Crimean War and she founded a professional school of nursing.  Florence Nightingale, however, came from a well off background with many influential friends, which made it easier for her to make things happen.

Mary Seacole also shines as an amazing life force and role model in her own time and today too. Born in the Caribbean at a time when most black people were still treated as slaves there, she forged TWO successful, international careers full of adventure: one that helped the sick and wounded in the Caribbean and in Crimea and the other, an exciting roller coaster of a business career!  A 2004 poll recognised Seacole’s achievements and voted her top of 100 great Black Britons. We’re proud to have both her and Florence Nightingale in our games. 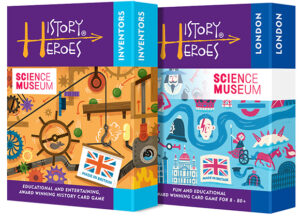