« Read more in: Artists, Did You Know?

Who are the greatest artists in history? 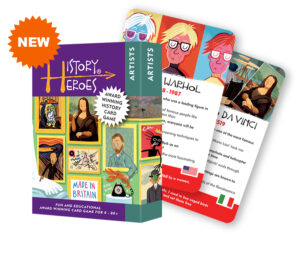 We asked Alex why she had been reluctant to bring out an ARTISTS game. “It felt such a huge question”, she explained. “There are so many amazing, important artists in history. I knew that some huge names would have to be left out and that felt daunting. I also worried that it would be too big a challenge for our fantastic illustrator, Wesley Robins. He has done such an amazing job, illustrating all our other games. But I can’t imagine what it would feel like as an artist, having to breathe new life into our ideas about some of the greatest artists in history.”

The Range of Artists chosen:

Luckily Wesley was up for the challenge. So, as with every game History Heroes creates, they then turned to a panel of experts to help draw up a list of artists for inclusion. As you can imagine, the list was long.  The game became specifically about painters. It would have been impossible to include sculptors too – another game perhaps! There are painters in the ARTISTS game, who are amazing sculptors too. An obvious example would be Michelangelo. But any artist-sculptor included in the game is known as much, if not more for their painting too.

There were still way more than 40 possible artists who could ‘make the cut’ in the game. Alex and the panel discussed limiting the period of artists covered. 40 of the greatest artists in history from the 20th and 21st century could easily have filled the game on their own – another game in the wings! But it felt important to start with a broad, narrative arc of who were the greatest artists in history from (near) the beginning to the present day. That followed the pattern of all the other games to date: to give a broad shape of who made history, how and when. It also gives a fantastic sense of who influenced who, such as the Japanese artist, Hokusai, who, influenced all the Impressionists massively.

It was also important to include as diverse a range of artists – diversity in backgrounds and styles – as possible. All the artists in the game, however, HAD to earn their place. When you’re fighting for a place in the game with Caravaggio and Gainsborough – both NOT in the game! – you’d better have a good reason for being included. History Heroes is confident that artists like Jean-Michel Basquiat, Artemesia Gentileschi and Yayoi Kusama defintely cut the ARTISTS mustard!

History Heroes researched and wrote the game. Wesley worked his magic and has created stunning illustrations. The game has been fantastically received so far. It came out in mid-November and went into the National Gallery shop a week later. Many other retailers have quickly followed suit. It has also just won ‘Highly Commended’ in the prestigious Gift of the Year’s Awards finals!

If you haven’t seen the game yet, you can buy it here. We really hope you like it! 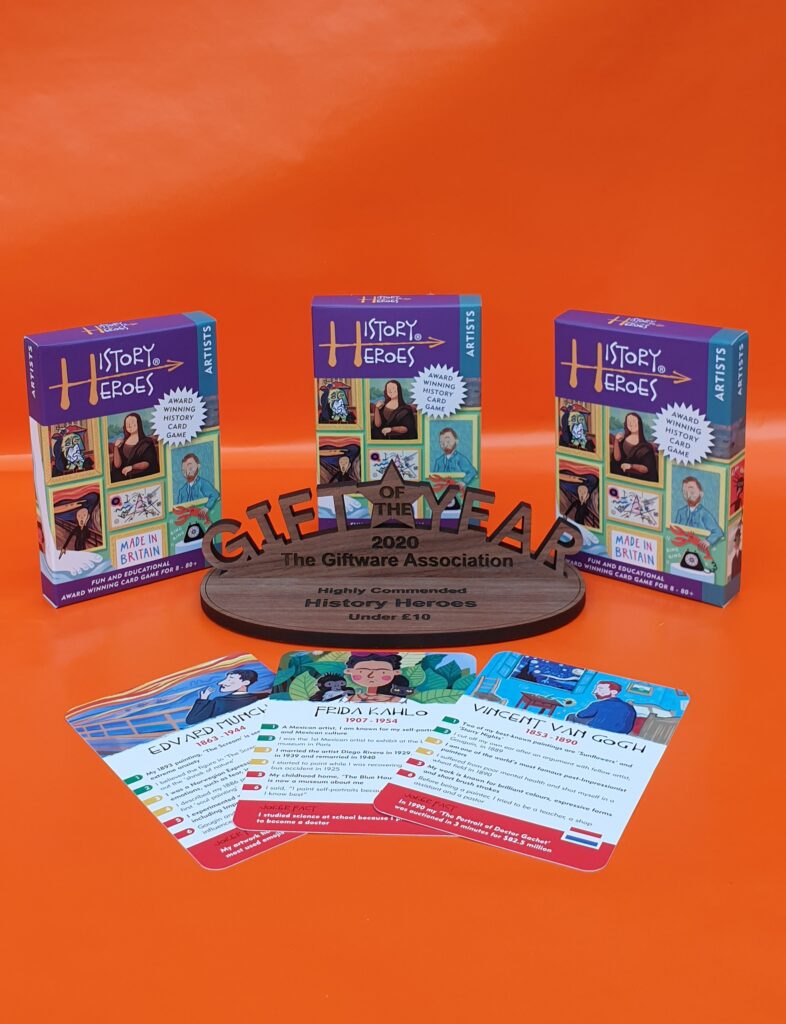