Guy Fawkes and the Gunpowder Plot

Guy Fawkes and the Gunpowder Plot: 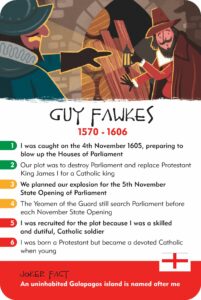 In 1592 a 21 year old Guy Fawkes went abroad. He joined the Catholic Spanish army to fight Protestant Dutch forces in the Netherlands. During that time he adopted the Italian name, ‘Guido’, instead of Guy. He also proved to be an excellent soldier and became an expert in the use of gunpowder.

In 1603 Elizabeth I died and James VI of Scotland and Ireland became England’s new king, James I. Guido and fellow Catholics hoped that James I would be more tolerant of Catholics. James’ mother and his wife were both Catholics. But there were two small Catholic plots against James I in 1603. By 1604 he announced his ‘utter detestation of Catholicism’. Guy/Guido Fawkes and his fellow Catholics realised they would gain no freedom of worship from James I and would continue to be treated unfairly in England. 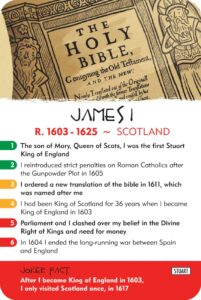 Thomas Wintour, a fellow Catholic, encouraged Guy Fawkes to join a group of conspirators to kill the king. They planned to blow up him and the Houses of Parliament during the Opening of Parliament on 5th November. They smuggled 36 barrels of gunpowder to the cellars below parliament and it was there, on the 4th November that the king’s men caught Fawkes with the gunpowder.

The king’s men took Guy Fawkes to the Tower of London. They tortured him there for 2 days until he signed his confession as Guido Fawkes. The king sentenced Fawkes to death. He was executed on the 31st January 1606. His dead body was then cut into quarters and sent to different parts of the country. The pieces of his body were put on display for the public to see.

Many people believe that James I used Guy Fawkes and the Gunpowder Plot  as an excuse to be even harsher to the Catholics. Some believe that the king secretly allowed the plot to NEARLY take place for that very reason. It seems odd that we still ‘celebrate’ the burning of Guy Fawkes. He was trying to kill the king, which wasn’t a great plan but plenty of people have tried to do that before and since and their deaths aren’t a reason for celebration now. Why him and why the Gunpowder Plot particularly? One place that has had a bonfire every 5th November but NEVER burnt an effigy of Guy Fawkes is his old school, St Peter’s in York. Should we all follow suit? 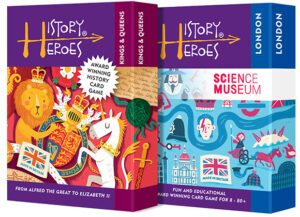