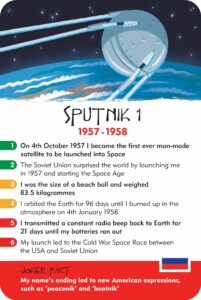 Sputnik 1, a card in our SPACE game,  was the size of a beach ball and weighed 83 kilos. The Soviet Union had planned to put up a much bigger satellite into Space – one that weighed nearly 1,400 kilos. But the bigger satellite created many more challenges and the Soviet Union were worried that the Americans might beat them to it if they waited too long. The USA and the Soviet Union were the two strongest countries after World War 2: the super powers. Both wanted to be that little bit more ‘super power’ than the other. So both nations worked in secret to aim to be the first one into Space.  As the Soviets ran into more problems with the bigger satellite, they decided to not wait any longer and send a small one up first instead.

The Dawn of the Space Race:

So, at 7.58 pm on 4th October 1957 they successfully launched Sputnik 1 from a base in Kazakhstan to begin its first 98 minute orbit of the Earth. Sputnik 1’s launch took the world by surprise and is called the Start of the Space Age. In fact its story had begun years before. In 1952 the International Council of Scientific Unions chose 1957-1958 as the ‘International Geophysical Year’. In 1954 the Council passed a resolution to launch an artificial satellite during that year to map the Earth’s surface. America announced plans to launch an Earth orbiting satellite in July 1955. But the Soviet Union got there first! 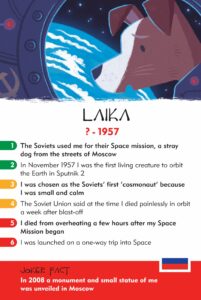 Only a month later the Soviet Union shocked the world again. in November 1957 they sent up the first living creature to orbit Earth – another one of our  SPACE History Heroes: Laika. Laika was a stray dog, picked up from the streets of Moscow. She was small and calm and became the Soviet Union’s first cosmonaut! Sadly Laika did not return to Earth alive as the Soviet Union had not yet worked out the technology to bring her back. But her journey into Space showed Space travel WAS possible.

People outside the Soviet Union panicked at that country’s achievement. They thought Sputnik’s launch could lead to the Soviet Union launching ballistic missiles into Europe and using Space as a new battlefield. Sputnik 1 orbited the earth for 96 days until it burned up in the atmosphere on 4th January 1958.  It sent back important information about Space’s atmosphere and communication methods. It showed how spacecraft materials might behave in Space. The USA quickly sped up its Space plans and increased funding for its research. In July 1958 it created the National Aeronautics and Space Administration, which we all now know as NASA .The USA and the Soviet Union then raced to put the first man into Space…and that leads us to a whole load more SPACE History Heroes. Find out lots more about them when you play our SPACE game 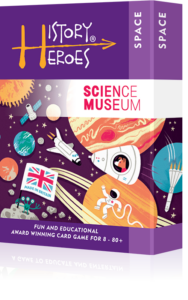