History Heroes reviews have been coming thick and fast recently. We like that a lot! We came across a lovely review of History Heroes’ most recent game: CHILDREN quite by chance. 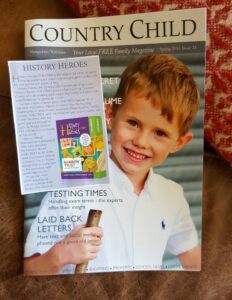 We picked up Country Child Magazine – where else, but – in the hairdresser’s of course! And there we were.

…and another of History Heroes reviews: 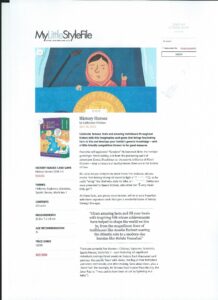 MyLittleStyleFile’s review of History Heroes is great. It’s very complimentary. It’s extremely comprehensive too. It raises an issue about which we care passionately: female History Heroes. MyLittleStyleFile points out that only 25% of History Heroes’ EXPLORERS, SCIENTISTS, WORLD WAR I and SPORTS HEROES are female. CHILDREN heroes, on the other hand are almost half and half male: female. We worked extremely hard to include as many female History Heroes as possible in ALL the games. We were restricted, however, by the fact that History Heroes card games aim to cover 40 of the most significant charaters in each title during the last 1000 years. World War I is different and time specific. There again, though, the history of World War I in the early Twentieth Century is still a pretty ‘male’ affair.

We found it very interesting, therefore, that History Heroes’ CHILDREN heroes are almost equally male: female. The CHILDREN characters are also multiracial.  The CHILDREN History Heroes characters span (more than) a 1000 years like the other games. Somehow children seem to have been able to slip under history’s barriers much more easily than women. It makes sense, we suppose. In history a child did whatever they felt they had to survive/escape/conquer without being so aware or respectful of social constraints at the time.

The good news is that there would be a far greater number of female History Heroes if our card games only covered the last 25 – 50 years of history. As we all know, things HAVE improved. There are, for example, many more fantastic female scientists, who would easily ‘make the cut’  in a History Heroes card game, covering only the last 25 + years. We look forward to more and more female HISTORY HEROES coming through. And, we will keep working on representing history as fairly and as comprehensively as we can.

In the meantime, have a look at our other appearances in the Press too. We look forward to seeing some more very soon! 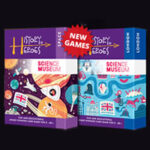