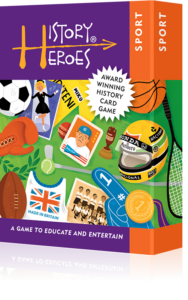 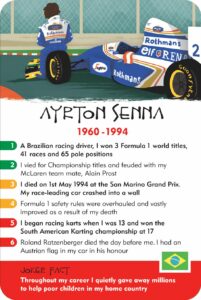 Name: Ayrton Senna Nationality: Brazilian Featured in: History Heroes SPORT Famous For: Being a three time Formula 1 champion, winner of 41 races and participant in 162 Grand Prix Born: March 1960 Died: May 1994 – in an accident while leading the San Marino Grand Prix

Ayrton Senna, 1 of History Heroes: SPORTS HEROES,  A three time Formula 1 champion, he won 41 races and 65 pole positions. He was seen as an extraordinary talent, almost a force of nature at the time. He was ruthless and fearless in his driving. This led him to an unhappy rivalry with his erstwhile McClaren team mate, Alain Prost.

Senna’s fearlessness on and off the racing track also led him to clash with some of the very powerful racing establishment, notably the then FIA president, Jean-Marie Balestre. There is a fantastic documentary film about Ayrton Senna, called – imaginatively – ‘SENNA’.  We can’t recommend it too highly: https://www.facebook.com/sennamovie . You DO NOT have to be interested in racing driving AT ALL to enjoy this film. It is an incredibly moving, vivid portrait about an extremely talented and complex human being on a fascinating, tough journey. The documentary footage is astounding at times and the interviews, insightful andpoignant. Worth watching!

Despite his ruthless racing reputation, Ayrton Senna was deeply religious and caring. Throughout his career he quietly donated millions to help children in poverty in Brazil. He also cared deeply about his fellow racing drivers. Heartbreakingly, Ayrton Senna put an Austrian flag in his car before the race in which he died on 1st May 1994. It was to honour his fellow racing driver, Austrian Roland Ratzenberger, who had died in a race just the day before. You can read more about Ayrton Senna on the McLaren website Or https://www.ayrtonsenna.com.br/en/ There are many books written about this legendary sports person – you can see a selection https://www.thebookpeople.co.uk/webapp/wcs/stores/servlet/qs_searchResult_tbp?searchTerm=Ayrton+senna&catalogId=10051&langId=100&storeId=10001 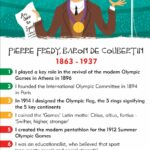 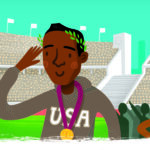 Jesse Owens, one of History Heroes’ Sports Heroes, was born today: a hero for his talent, determination and dignity throughout his life