John McCrae, a First World War Hero, is known to many as the writer of the iconic World War I poem, ‘In Flanders Field’. It is an achingly poignant First World War poem, all the more so when read in the context of when it was written.

John McCrae, a History Heroes: World War I hero, arrived in war torn Belgium in March 1915. He was a Canadian surgeon, attached to the 1st Brigade Canadian Field Artillery of the 1st Canadian Division. The division took up position around the Belgian town of Ypres. On the 22nd April, they distinguised themselves in their first major battle by holding out against the first German gas attack of the First World War.

On the 2nd May McCrae’s good friend and fellow Canadian, Lieutenant Alexis Helmer, was blown apart by military fire. His body parts were collected in a blanket and McCrae conducted his funeral service. The next day John McCrae finished ‘In Flanders Field’:

In Flanders fields the poppies blow
Between the crosses, row on row,
That mark our place; and in the sky
The larks, still bravely singing, fly
Scarce heard amid the guns below.

We are the Dead. Short days ago
We lived, felt dawn, saw sunset glow,
Loved and were loved, and now we lie
In Flanders fields.

Take up our quarrel with the foe:
To you from failing hands we throw
The torch; be yours to hold it high.
If ye break faith with us who die
We shall not sleep, though poppies grow
In Flanders fields. 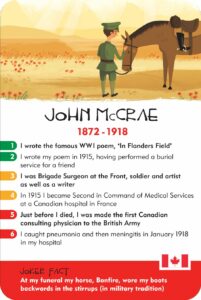 John McCrae, who had published poetry for years before, sent ‘In Flanders Field’ to the Spectator magazine, who rejected it. The poem was published anonymously by (the now defunct) Punch magazine in their 8th December 1915 issue. American humanitarian, Moina Michael, inspired by the poem, then campaigned for the poppy to become the symbol of remembrance for all those who died in the First World War.

John McCrae died before the First World War ended along with so many. He had risen through the ranks to become the first Canadian consulting physician to the British Army but caught pneumonia and meningitis in his own hospital and died on the 28th January 1918.