Fabian Ware – a World War 1 History Hero and founder of the Commonwealth War Graves Commission 98 years ago today, 21st May 2015, in the thick of World War One. 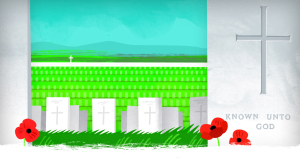 Fabian Ware, Founder of the War Graves Commission in WW1

It seems a good time to honour the work of the Commonwealth War Graves Commission by honouring their founder and our World War 1 History Hero: Fabian Ware. Ware was a journalist, originally from Bristol, and determined to join the war effort in WW1. Born in 1869, Ware was 45 by 1914 and too old for active service. So he joined the Red Cross and commanded one of their mobile units in war-torn France. He was immediately appalled by the volume of fatalities and struck by the lack of planning for the graves of the war dead.

At the end of World War 1 the Imperial War Graves Commission pledged to treat all war graves equally and uniformly, regardless of rank. This policy led to the poignant rows of identical white graves throughout France and Belgium. Fabian Ware commissioned the best architects to create the cemeteries and monuments for the fallen of World War 1 and turned to Rudyard Kipling for the inscription on the graves of the unkown: “Known unto God”.

Today the Commonwealth War Graves Commission maintains the graves of the 1.7 Commonwealth servicemen & women, who died during the two World Wars. The graves are in over 153 countries across all continents, except Antarctica. We honour their work and recommend you find out more about their work at their website: http://www.cwgc.org/ , which includes photographs of beautiful and poignant war graves worldwide. 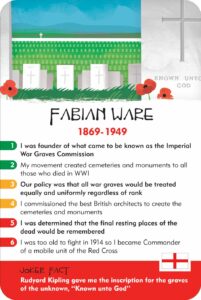