Did you hear James Naughtie on R4’s Today programme this am? He presented he most shockingly weak link, which at first sounded very interesting to us at History Heroes: he talked of the little known inspiration in the WW1 flying ace, Albert Ball’s life, which has recently come to life.

As you will know, we have an interest in all things WW1 so we waited with baited breath. It turned out that they had recently found Albert Ball’s mother’s plum cake recipe, which Albert Ball had liked very much and had sometimes eaten before flying! A chap in the studio had just won a prize to bake the plum cake, using Mrs Ball’s recipe!  Now we love R4 Today, but that tested even our loyalty.

It also reminded us about the flying ace WE celebrate in our WW1 card game, WW1 History Hero: Edward (Mick) Mannock. 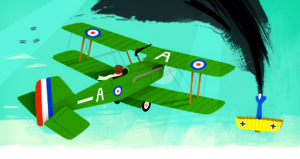 Not as well known as Albert Ball,  in fact Mick Mannock had the highest number of victories in the Royal Flying Corps and was unusual for coming from a very poor background at a time when pilots were generally very posh. He was nicknamed ‘Mick’ because he came from an Irish background – original!  Mick Mannock was unusual for many reasons: he had had to leave school by 13 after his father abandoned the family and had found himself imprisoned in Turkey at the start of WW1, having been working there as a telephone engineer. Badly beaten and treated in Turkish prisons, Mannock returned to Britain in very poor health and declared ‘unfit for duty’.

Determined, however, to seek retribution against the Germans, Mannock recovered enough to join the British Army and then become a Major in the Royal Flying Corps in 1916. Bizarrely, for one of the most decorated British pilots in World War 1, Mannock only had proper sight in one eye, having lost most of his sight in his left eye from a childhood infection. He also often displayed nerves and fear before flying and, so frightened of burning alive was he, that he always carried a gun to shoot himself in case his plane caught fire.

Despite this, Mannock’s success in the air and leadership skills earned him great respect and admiration from his fellow pilots. He was generous too with his peers: often sharing ‘victories’ with them or allowing them to claim them themselves.

Mick Mannock was shot down on the 26th July 1918. Although his plane crashed and burned, a German soldier returned Mick Mannock’s medals in pristine condition to England via the Red Cross. This suggested that Mick Mannock had jumped clear of the plane before impact and at least had not burnt alive.