Walter Tull is a World War One History Hero

Walter Tull is a World War One History Hero – deservedly. Walter Tull was the Black combat officer in the British Army at a time when official WW1 military regulations forbade ‘any negro or person of colour’ being an officer. He was also an exceptionally talented, modest and admired person. 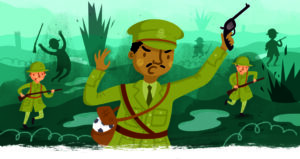 Born in Folkestone on 28th April 1888 to a father from Barbados and a mother from Kent, Tull’s parents had both died before he was 10. Walter Tull was sent to an orphanage in London for the rest of his childhood.

He started his career as an apprentice printer but, an exceptionally talented footballer, he was soon spotted and signed up for first Clapton and then Tottenham Hotspur FC in 1909.  Only the second black, professional footballer in Britain, from 1911 Walter Tull played for Northampton Town until he signed up to the British Army in 1914 as part of the Football Battalion, along with many other footballers.

Like so many, Walter Tull had a harrowing time in the trenches in France & briefly returned to England in 1916 to recover from Trench Fever (and possibly shell shock). By 1917, however, he was back in France, having become an officer. He led his men with ‘gallantry and coolness under fire’. He was hugely admired and respected by his men and when he was shot, at Arras in No Man’s Land on 25th March 1918, his men risked their own lives to try to recover his body.

Unfortunately Walter Tull’s body was never found and subsequently little fuss was made of this modest but exceptional leader. In August 2014, however, the Royal Mint put him onto a £5 coin to commemorate the First World War, giving him a little bit of the recognition due.