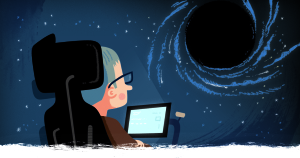 Find out more about or buy HISTORY HEROES SCIENTISTS

Stephen Hawking famous for: Reshaping the way we think about the Universe and Black Holes

Galileo Galilei famous for: Being an astronomer who discovered that there were mountains and valleys on the surface of the moon.

Galileo Galilei was born on 15 February  1564 near Pisa In Italy. He was the son of a musician and  fundamentally changed the way the world was viewed in the 17th century, so much so that the Catholic Church branded him a heretic and put him under house arrest. Through his astronomical studies and the telescope that he built himself, he was able to prove Copernicus’ Theory that the Sun was the centre of our Universe. Until then, people believed that the planets moved around the stationary Earth. Galileo also revealed that the Moon was a planet of mountains and craters; he identified 4 moons orbiting Jupiter and in 1610, Galileo discovered the Rings of Saturn. Galileo frightened people by his discoveries by making clear that there was a lot more ‘out there’ that we don’t know about and we can only learn more by continuing to observe, question and make sense of all that we discover.

Who better to embody this premise in the present day than Stephen Hawking,  who has reshaped the way we think about Black Holes and the Universe – that Black Holes are not voids, but radiate matter and that the way the Universe began was determined by the laws of science, rather than God. Lucky for Galileo that he didn’t go that far in the 17th century: it wouldn’t have just been a house arrest for him then!

The spooky links between the two scientists/astronomers,

Spooky Link 1) Apart from the clear link in their respective bodies of work, is that Stephen Hawking was born in Oxford on the 8th January 1942, 300 years TO THE DAY of Galileo’s death.  As Stephen Hawking himself said, “200,000 other babies were also born that day. I don’t know whether any of them were later interested in Astronomy”

Spooky Link 2) History Heroes’ Scientists game can offer its own spooky link between the two men: their cards come after each other alphabetically in our card game!