Gavrilo Princip is one of our more equivocal ‘History Heroes’ so far. He’s in our World War  1 History Heroes card game, due out in June: Gavrilo Princip, a then19 year old Bosnian Serb, is often described as the person, who started World War 1. This week, 100 years ago, Princip set out from Belgrade on a 10 day journey to Sarajevo. He was on a mission. Gavrilo Princip was to meet up there with fellow Serbian Nationalists to put the final touches to their plan to assassinate the Austrian Archduke Franz Ferdinand during his forthcoming visit.

Franz Ferdinand, heir to the throne of the Austrian-Hungarian Empire, represented an empire that had annexed Bosnia-Herzegovina six years earlier and clearly had designs on other Balkan countries too. Franz Ferdinand actually opposed the Austrian plan for expansion into the Balkans but he was, unfortunately, the wrong person in the wrong place at the wrong time. 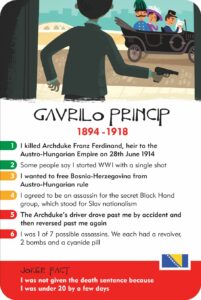 Gavrilo Princip, who shot the bullet that started World War 1

Princip was captured and should have received the death penalty but Austro-Hungarian law dictated that no one under 20 could be put to death. Princip killed Franz Ferdinand on the 28th June 1914, and turned 20 on the 25th July.  Instead he died in prison 3 years later, having been the touch paper to the start of World War 1. It might be hard to see him as a ‘HERO’ but he represented a swathe of nationalities, who felt hopeless against the might of a seemingly all-powerful empire and he really is too important to the story of World War 1 to leave him out. We’re sure there will be other History Heroes, who can be viewed in a more complicated light too!