History Heroes:  The English Civil War is also known as the Wars of the Three Kingdoms: a far-reaching, violent period of British history in the seventeenth century, which laid the foundations of our modern world in many ways. Recently History Heroes went on a ‘field trip’ to visit the new National Civll War Centre in Newark.

The centre gives a comprehensive and engaging overview of that turbulent period of history through many different channels – audio visual, interactive, hands-on features and some graphic and interesting, if sometimes grisly exhibits. Here’s one: 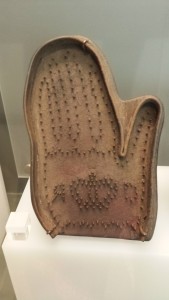 We took a straw poll with several individuals, asking them what they thought this exhibit might be. Most suggested that it might be a kind of mould for a glove, maybe for the Royalists, the Cavaliers? Well, sort of….in a horrible kind of way: It’s a hand brand for ‘Felons & Deserters 1642-70’.

Its inscription at the Civil War Centre reads, “It was used to permanently stamp or tattoo army deserters or criminals.  This example was used by the Royalist Army (so presumably the Roundheads had their own version), as indicated by the initials ‘CR’ surrounding a crown. The metal spikes on the hand are blunt, but it is likely that they were heated first to burn the imprint in”

Be reassured: although the Civil War Centre invites and encourages its visitors to fully immerse themselves in the history and experiences of the time, you won’t find yourself branded like this as part of the experience! The Civil War Centre is sited in Newark as a result of Newark’s importance in the progress of the Civil Wars. The town, a Royalist garrison at the time, lay at the crossroads of the Great North Road and the Fosse Way and provided an important crossing over the River Trent. As a result, it found itself besieged for six months in 1646 by 16,000 troops from Parliamentary forces and their Scottish allies.  1/3 of Newark’s inhabitants died at the time.

As a result, the extremely handsome market town is dripping in Civil War history. The new Civil War Centre puts that history in context. It’s well worth a visit.