History Heroes’ New facebook Competition: We’ve just launched another ‘What and Where Am I? competition on facebook. 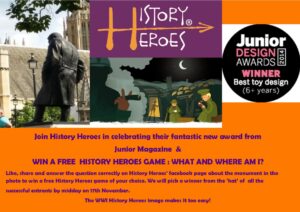 We thought we would celebrate our new award from Junior Magazine for Best Toy Design 2014 (6+ years) by a new competition as well as offering all you in the UK free first class postage on all orders between now and 31st December.

Tell us who and where the monument is in the photo (too easy, we know!), like our facebook page and share the competition for your chance to win an AWARD WINNING History Heroes game of your choice. We will be pulling a winner out of the ‘hat’ next Monday at Midday, 17th November. Good luck!