As non-Scots, be reassured that History Heroes will not pronounce on whether the Scottish people should vote ‘no’ or ‘yes’ but we do have a Scottish WWI History hero to talk about: Elsie Inglis. We think she’s a great reminder of how the most important values should and do transcend this kind of debate.

Elsie Inglis was born in 1864. She was a Scottish doctor, who set up the Scottish Women’s Hospitals Unit in World War I to serve the Allies. She originally approached the British War Office to offer her services but they rejected her, saying, “My good lady, go home and sit still”. Delightful! Elsie Inglis ignored them, thankfully, and soon had established all-women hospital units in France, Serbia, Corsica, Salonika and Russia. Inglis’ units improved hygiene and reduced epidemics raging in Serbia and she became the first woman to be awarded the Serbian Order of the White Eagle. Local citizens and the Serbian army built a memorial to Elsie Inglis in 1915 in Mladenova in her honour. Inglis died of cancer in 1917.

One of the many great points about Elsie Inglis’ work and particularly relevant today is that women from all nationalities joined the Scottish Woman’s Hospital units and all were proud to be called ‘Scottish Women’. Where they came from was less important than the fact that they knew they were a part of something very good. 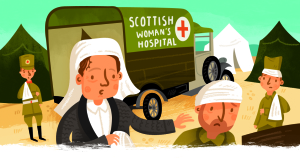