Jocelyn Bell Burnell, as you may well know, discoverd pulsars, was the first female President of the Institute of Physics and was made a Dame as one of the many accolades received for all her achievements. She was fascinating and incredibly impressive: obviously brilliant, but almost more importantly charming and a great communicator. She gripped her audience – including History Heroes – as she talked about where we all come from in relation to the Big Bang. Then she was interviewed about her life and progression through science. She explained what a pulsar was: ‘a kind of star, which sends out radio waves’. I felt sick: History Heroes’ first fact about her states:

This went on throughout her talk for all 7 of the facts that History Heroes stated about Bell Burnell. Thankfully every History Hero fact was mentioned and hit its mark. Even better, I was probably at least half a stone lighter by the end of the talk.

I handed over the pack of Scientists to Jocelyn Bell Burnell at the end of the talk and, as a rule, we at History Heroes don’t like to boast, but feel compelled to report that she really liked the game and described it as, “really impressive and extremely accurate”. Proud and thinner, I left. 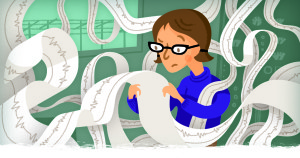