Gertrude Bell, one of History Heroes’ Explorer Heroes, was born today,14th July, in 1868. She was an unstoppable, extremely intelligent and capable woman who achieved more than most people could imagine achieving now in the 21st century, let alone a woman of her time. She graduated with a first from Oxford in History before travelling throughout Europe. During her Europe travels, she had a mountain in the Alps named after as she had climbed it first. 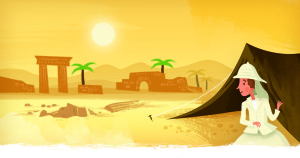 Then she turned her attention to the Middle East. She lived and worked and fell in love with Mesopotamia and through her archaeological explorations, she became an expert on thearea. As a result, she became the first female political officer, i.e. spy, ever employed by British intelligence. She helped map large swathes of the area and helped to map and create modern Iraq after the First World War.Surprisingly, among Bell’s  many achievements was to become the first honorary secretary of the anti-suffrage movement, the movement dedicated to STOPPING UK women from receiving the right to vote in political elections.  Gertrude Bell, the woman who had worked tirelessly throughout her life, believed strongly that women did not deserve the vote, if they did not work outside the home.