Billy McFadzean at the Battle of the Somme, 1st July 1916

The British and French planned a military offensive in the departement of the Somme to break through an eighteen mile long line of German entrenched fortifications. It was scheduled to start on the 1st July 1916 and end quickly with a decisive Allied victory. So confident were the British and Commonwealth military officers that they instructed their soldiers to leave their trenches and walk SLOWLY towards the Germans, who they could then capture.

As we all now know, 60,000 British and Commonwealth soldiers were wounded that day, 20,000 of those killed and the Battle of the Somme was soon seen as a tragic place of indiscriminate slaughter. Many of those soldiers were unimaginably brave, including one of our World War I Heroes: Billy McFadzean. 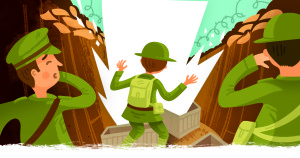 Billy McFadzean was a bomber, whose job was to go ‘over the top’ with buckets of hand grenades. Before the Battle of the Somme began, on the 1st July 1916, Billy threw himself on a box of bombs about to explode in the trenches packed with soldiers. Billy died but only one other soldier was injured in the incident, thanks to Billy’s sacrifice. He was awarded the Victoria Cross for ‘most conspicuous bravery’. Heartbreakingly Billy wrote of the war in a letter, before he died, “If I don’t add much lustre to it, I certainly will not tarnish it”. No one could add ‘lustre’ to such a terrible war, but Billy certainly added total self-sacrifice and humbling bravery and saved many lives, however briefly.